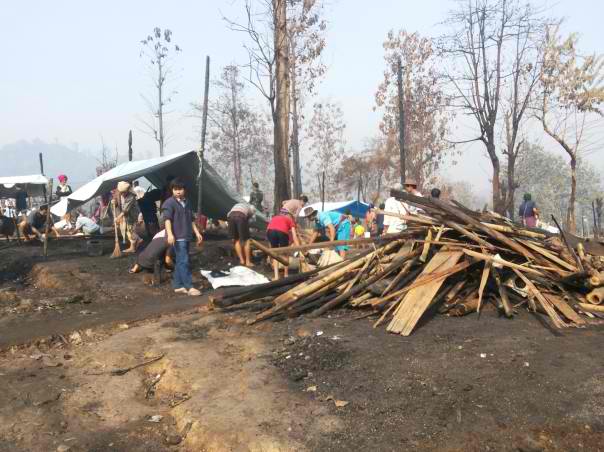 BANGKOK (Thomson Reuters Foundation) – Back-to-back fires that ravaged two refugee camps along the Thai-Myanmar border – killing one person and affecting 900 – have added to mounting pressure on the refugees to return home, amid talks on repatriating them as Myanmar opens up after half a century of brutal military rule.

Fires are a regular hazard in the nine camps that house some 130,000 refugees along the border. The Thai government forbids the use of materials that might suggest a more permanent stay – even though many of the camps have been around for more than two decades – so homes are built using highly flammable materials such as bamboo, thatch and eucalyptus.

The latest fires, however, came at a time when opportunities to resettle in a third country are diminishing, and officials from both countries are talking about repatriating the refugees, many of whom fled war and persecution decades ago. Many international donors are also turning their attention to funding projects within the country, and the camps have been hit with reduced funding.

Sally Thompson, executive director of The Border Consortium (TBC), a non-government organisation (NGO) that has been working in the camps since the 1980s, said refugees’ future return to Myanmar should be voluntary, yet lately they feel they are being nudged out.

“When you get things like the fire, the reduction in services in the camps – it’s seen as a push factor. All these incidents served to put pressure and anxiety on the refugees that they’re actually being pushed into making decisions to go back,” she said.

Mitos Urgel from WEAVE, a small NGO that works mainly with female refugees from the camps, agrees.

“Every day they face uncertainty, whether it’s about repatriation or the day-to-day struggle to earn a living. There’s no clarity on what the future will hold,” she said.

“(Fires) are not something new in the refugee camps, but because of talk of resettlement, funding going down and the reduction in the food basket, it’s making them feel really bad.”

The first blaze occurred on Dec. 27 in Tak province’s Mae La camp, the biggest Burmese refugee camp in Thailand with some 44,000 refugees, most of them ethnic Karens. A second fire swept Ban Mai Nai Soi camp, home to Karenni refugees, in Mae Hong Son province the next day, killing one woman. Both are in northern Thailand.

Thai authorities are currently conducting investigations as to how the fires started, but it is believed no foul play was involved. Oftentimes, fires in the camps are sparked by cooking accidents and quickly spread out of control because the huts are built close together of highly flammable materials.

Around 180 homes were damaged or destroyed by the fire or pulled down to prevent the fire from spreading, and 854 people were affected. Aid agencies say shelter and ongoing trauma counselling are the most urgent needs.

“A fire is always bad because these people have so very little, yet whatever they’ve managed to put together and build as a family is gone in an instant. They’re having to rebuild from nothing,” Thompson said.

“Emergencies like this are really an acute reminder of how vulnerable the refugees are on a day-to-day basis and how they still do need ongoing support.”

Local Thai communities, the United Nations refugee agency (UNHCR) and other NGOs have provided support in this instance, but Thompson says it is now very difficult to hold donors’ interest in refugee camps as the focus is on the changes inside Myanmar.

As Myanmar reforms politically, donors are now looking at funding projects within the country or those that assist the refugees’ eventual return to Myanmar.

“That’s where the interest lies when in fact now is really time when we need to be preparing refugees here so that when the time comes for them to return, they’re in a good position in terms of skill sets, knowledge and understanding of the situation inside the country, and they will be able to go back and reintegrate with communities that never left,” she said.

Rebuilding is now under way and TBC anticipates the majority of reconstruction to be complete by the end January. The same flammable materials will be used as Thai authorities have not approved TBC’s request to use tin roofs, Thompson said.

“The Thai policy is that the refugee camps are temporary, and in the current climate of an evolving situation inside Myanmar there is little willingness to revisit or change that policy,” she said.